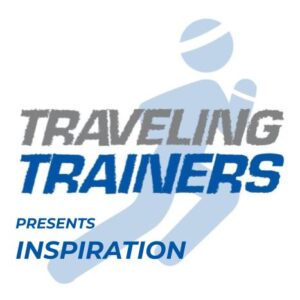 “Hey ya guys JaCory Marshall here with Traveling Trainers. I am your personal trainer. Today we have another topic at hand that’s going to help you along your wellness journey. It’s going be able to allow you to thrive and to surpass those goals that you have at hand.

We talked about motivation already, which gets you started on that path and gets you going. But that’s just the beginning. Motivation will wane, especially during those times when it gets tough. When it’s high, you know, you feel on top of the world. But there’s going to be some low points where you don’t see the change that you’re looking for being in your diet, being in your workouts, being in your rest time, being in your meditation time. You need other people to come alongside you. You need other tools to have in your bag, past just being motivated.

Motivation is a “ra ra shis come bah” at like a sporting event. But after the lights go out after the clock is zero, then what? When nobody’s watching, nobody’s around you.

So, we are going to talk about inspiration, now. Being inspired.

I learned a while back in business ventures that being inspired goes a long way into reaching your destination. It’s what helps you thrive, helps you get through those ups and downs, those valleys, the ebbs and flows if you will.

So what inspires you? Who, what, where? You have to have this thing together.

Just some tips to have in hand for being inspired:

Look at somebody that you can see them from their starting point all the way to where they are now through the struggles. Do your research on this person. And, if they’re definitely in your field, try to mimic them a little bit. Obviously you have to put a tweak on it but have somebody that inspires you. It could be your parents, it could be your sibling, it could be a classmate, it could be your teachers, it could be anybody at your job. But, always have somebody, maybe more than one person, that inspires you day in and day out that you can call on to tell them about your problems, to be able to vent, to be able to get ideas from. Somebody who can always cheer you up, to tell you what you’re doing wrong. I know some people don’t like that to happen, they don’t like to admit that, you know, we aren’t perfect. But, that, you know, you might need to take a step back and reevaluate where you’re coming from. Alright? So, those are the people that, you know, should be around you. Talking about your core. Acquaintances come and go but your core needs to be strong. And if they’re not, you need to evaluate that, as well. If they’re not going places, doing the same old stuff, making the same ol’ mistakes day in and day out, that’s a problem. They’re not trying to elevate themselves in some form or fashion, trying to build others up, the community up, that’s a problem. So, who are you hanging around? That can stunt your growth right there more than anything, or take you even straight back to square one. I advise you to get somebody that inspires you.

The biggest problem with people that I encounter, and sometimes even myself, so I’m not exempt at all, is consistency. That be in the weight room, that be in your eating habits, that be in your time of rest (that’s undervalued). Just being consistent. Be it whatever job you’re in, it’s a day in and day out situation.
Stay focused on that and you will go far, no matter what it is. Alright? Be it getting raises in the current job, or getting straight A’s in college or highschool, Masters, doesn’t matter. Just keep going.

Things take time. Don’t be the hare, be the turtle (I think they call it tortoise). Take your time, regurgitate. Know what you’re doing instead of trying to get there fast. And that’s the biggest problem, people want to get there fast because they want to say ‘I did it better than such-and-such’ or ‘I did it first’ or ‘I did it without help’. Just like the old saying goes, ‘the quicker it builds up, the quicker it goes away.’